Whats New With Us...

So last weekend I got myself out to meremoor a water that I have not fished in a good few years so when approaching it I decided to treat it as a new venue as so many things could have changed since then. Meremoor is a great little water not far from my home and has a good stock of fish considering its size and is great for getting a bite in the cold weather.

With the weather getting mild for the week running up to the weekend and the weekend itself looking mild I packed lite and head out to get to the venue as soon as I could. With traffic on the M6 and a few errands I had to run I arrived at just gone 3pm and knowing that the sun was due to set not long after 5pm I knew that I had to get a move on. So I got out of the car and set about my normal fact finding and looking out for any sign of fish.

As I stood at the corner of the lake I could see there was 2 guys packing up and 2 guys setting up over the other side of the water. As I walked down I managed to talk to a young lad who had been on for the day and not seen anything followed by a further 2 guys one of which was fast asleep in his bivvy. These 2 had been on for 24 hours already and not seen a fish come out but had seen 1 or 2 cursing in front just under the surface which was promising news. As I walk down the path there was 3 long island that almost split the lake into 2. The first of these islands had the 3 anglers I had just seen fishing to it which the second and third completely free. There was power line running across the centre of the lake 1 side to the other and as I walked under the lines I could see a sand bar that looked like it was a maximum of 8 inches deep and dropped off into the main body of the lake on both sides. As I go to swim 5 I noticed that the wind was now out of my face and the general temperature felt warmer for it but still had a chill. I stood here for a while watching the water looking for clues but still seeing nothing. I continued to walk round the lake keeping my eyes on the water. When I got to the other side I was greeted by one of the 2 anglers that had fished the water many times and was in the middle of his winter campaign here. He had not had many out to date but knew plenty about the water and it’s layout under the surface. He then pointed me in the direction of his friend who happened to be Tony the bailiff for the fishery who was getting in on the action himself. He had a wealth of knowledge as you would expect and pointed me in the direction of 2 swims firstly the he mentioned swim 5 which was the first swim I had stopped in and secondly a swim further down next to the car park as there had been a few guys there earlier and they had put a small amount of bait in. As I walked back to the car to load the gear onto my barrow I made the decision to setup in the first swim, swim 5 which had a choice of some open water as well as 2 islands and a clear gap between the 2 islands. By this time I had spent an hour walking round and discussing the water with other anglers and need to make heist to get the rods in the water before dark.

After getting set up I had put a bait on each island to my left and right and one to the reeds a little further down the bank to my right. With all 3 rods I’d give them a different colour pop-up on a spinner rig, a yellow high leakage pineapple, a white essential cell and a pink essential cell all baits from mainline. Just before I had chance to do anything else I hear the sound of alarms coming from the other side of the lake and Tony the bailiff was into a fish. Darkness was setting in and it was time to put the overwarp on the bivvy and set up my bed chair followed by food. As the hours passed the lake was now quiet and there was not a sound. So I decided to get my head down and catch some shut eye it was only 9pm but my intention was to get up at first light to scout for any signs of fish on the feed. With boots off and lights out I closed my eyes and in an instant it was 11:30pm and my left reel was spooling out line and the alarm screaming. I lifted into it and it was a fish, I’d dropped my head torch in the fuss to get out of the bag and onto the rod so started to play the fish with very little idea of where it was going or how far out it was. It felt small and didn’t really want to put up a fight and for a moment I thought it was a bream. Until it broke the surface and in the little light I had I could see it was a carp and of a decent size. I had to play the fish a little longer before I could get it in the net but once it was in I knew I had done alright and nailed myself a winter carp. 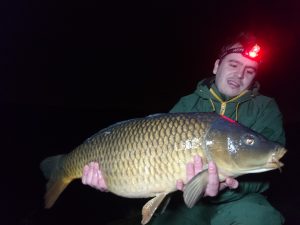 I left her in the net, in the water while I grabbed my torch, scales and weigh sling. Once I had everything I needed I lifted the fish on the mat and found it was a beautiful common in perfect condition and nailed in the bottom lip by the spinner rig with a size 4 krank. I was quickly joined by the the 2 guys from a few swims down keen to see my success. They helped me out with the weighing and with a few photos. The common came in at 20lb dead on. I slipped her back to the water, re-baited and re-cast. Then retreated to my bed to get some more sleep. I woke up earl for first light as I had planned but still no sight of feeding fish as I stood watch over the lake. I made the decision to stay where I was and stick the day out here after all I was happy with last nights result given the conditions. I made breakfast in the ridge monkey and waited a few hours before recasting. The hours continued to pass and with no sign of any action the end of the session was drawing close. I re-baited a few times during the final hours but with no signs of fish it had made life a little hard. As my time came to an end the lake was quiet and I made the decision to leave and head back home.

I never expect much from fishing in the cold weather and before the carp have started to wake up but this time I had come out on top and in my eyes the hard work and time I had put in when I arrived at the lake had done me well. The information gathered from Tony and the other anglers as well as what I had picked up while walking round just proves that location and prep is just as important if not more important than what you do with your rods,rigs, and baits. The hour I spent walking and talking to some people would be seen as a waist of time but for me it was priceless and I would spend twice this or more if it was the difference between catching or blanking and would encourage anyone to do the same.