How to catch carp on the cheap!

Catching carp on the cheap is no easy task these days with a kilo of my favourite bollies costing around £10 depending on where I get them. I decided to set out on a task to crack this and land me some good fish on the cost of 1 bag of bollies plus my ticket.

With £10 as my rough budget I set out and started to create my plan and after a bit of thinking I came up with Corn! yes that lovely yellowy goodness! Sweet smelling, bright coloured, crunchy and cheap. I then decided to pick a venue and after speaking with a angling buddy of mine we chose the Linear complex in Oxford. One of my favourite venues to fish and it has loads of lakes to choose from with a great stock of fish. We decided to travel down on a Sunday for a 24 hour session with a plan to leave around 2-3 pm on Monday. 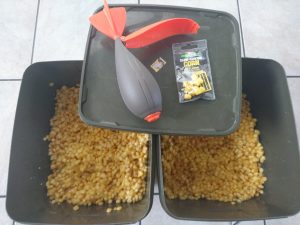 With a plan set out and a venue picked the only thing to do is to get the corn and a few bits from the tackle shop. So on Saturday I set off to my local supermarket and headed over to the freezers and spotted 900g bags of everyday sweetcorn. I loaded up my trolley with 8 bags (7.2 kg) and then decided to pick up the food for the session. Once I got to the tackle shop there was few things that I needed but one of those things would be crucial to what I plan to do, Slow sinking fake corn. After the trip to the tackle shop my total spend excluding food for me was £10.41 which was a result and I decided I could live with the 41 pence I went over the £10 budget but I could have easily dropped a bag of corn to make it within the budget. The only thing I had left to do was sort my gear ready for the morning.

Sunday morning came and Ste was at the door for 8am ready for our 3 hour journey down the M6. We loaded up and hit the road and with minimum traffic we decided to skip the toll and and save some pennies. After a long but easy journey we arrived at the gates for lunch time to be greeted by anglers leaving and packing up on every lake. It was like heaven and we were spoilt for choice. What lake to fish? What swim to fish? We were like kids at a sweet shop.

We set out for a walk round starting with Brasenose 1 and from some of the anglers we gathered that there had not been many fish out so we earmarked a few spots and set off to look at Brasenose 2. We probably got about half way down the far bank before we spotted fish and found two swims we liked. We had a South Easterly wind pushing into the swims and anglers leaving on both sides. Looks like we’d have the whole bank to ourselves. 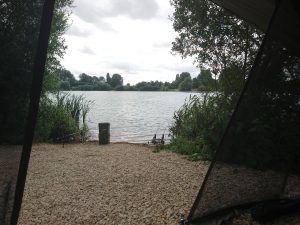 We rushed back to the van and and drove to the drop off point, unloaded all the gear and began to set up. I decided to sit on one of my buckets for while and just watch the water to try and get some clues but didn’t see a thing. The sun was shining and the wind was strong and it just seemed right to me that the fish were here or would be soon. I got my marker rod ready and began to cast trying to find a few spots to present my corn and after a while I’d found 2 spots out in front and made my choice, just on the edge of a gravel spot that seemed to lead in to a weed patch, this is where I would start. I clipped up the marker rod and counted the wraps to the spot then matched my 3 rods and the spod rod.

I started off with 10 spods of corn of the spot and then followed that with my 3 baits all on the same spot roughly 2 meters apart. My first rod had a pink pop-up on a short hinged stiff rig (I persuaded myself I wasn’t cheating as I already had these soaking in my glug pots), my second rod had a half n half bottom bait with pink pop up chopped down to the size of a few pieces of corn on a D rig (again glugged not cheating) and finally my last rod was 2 pieces of slow sinking corn on a D rig. With the traps set I set myself the task of feeding my belly. Out came the stove and the ridge monkey, Cheese and ham toasties. Just as I was about to put my second toasty on Ste comes over requesting takeaway, an offer I could not refuse, Mixed Kebab!
After an un-eventful afternoon and debating with myself to move swim I spotted some fish not far from my baited spot and decided to stick the night out in the hopes that dusk and the night would bring success. I climbed into my bag around 11pm and at this time we were well into darkness and my eyes became heavy and sleep was on the cards. Next thing I know my Delkim alarms spring into action with bright white lights and loud beeping and the carp ran at speed. I hit into the fish with one shoe on and the other in the Bivvy, I was into a fish and it felt reasonable in size. Now all I have to do is wake Ste in the swim next door and get him to bring my shoe. After a short fight we had it in the net. When unhooking the 1st of my session we found it was nailed right in the middle of its mouth and was the hook baited with the slow sinking corn. Weighing a reasonable 18.5 lb it was a welcome guest on the matt.

I got the rod back out as fast as I could and and changed the other 2 to match. Then followed up with another 6 spods of corn, I figured I don’t know how many fish have come in and snuffled my corn so wanted to put more in but was conscious to not over feed. I then got my head back down for a sleep with the aim of waking up for sunlight at 5:30ish.

With an early start I put 8 spods in to get the spot started and set out making breakfast putting the ridge monkey in use again. The day went quiet with only a few fish showing and no runs for either of us. Then come 12 o’clock the Delkims started singing this time on my middle rod and after the fish taking me straight into some weed I landed the second of the session weighing 16lb. It wasn’t long after this before I landed my third at 17lb, the swim had started to liven up. There was not a lot of time before the middle rod screamed off again and this time it felt like a good fish and my heart started racing. He headed straight for where I knew the weed was from the previous fish. I tried to keep him away but he pushed on ripping line from the reel and soon I was snagged up. I set the rod on the ground and give it some slack, sat down on my bucket and waited for the line to tighten up again once the fish had got free. It didn’t take long before the line tightened and I lifted the rod feeling the fish and the grind of something else. 2 seconds later and the line breaks and the rod straightens, I’m gutted, what felt like the biggest fish of the session had just snagged me up and snapped me off against a snag. I reeled my loose line and and inspected the end of my leader and saw around 6-8 inches of small cuts and it was clear that it had rubbed up against something rough. With concern for the fish I checked the length of my leader and it appeared I hadn’t lost much line and the lead will have dropped so I was confident the fish was free and as safe a possible. But as for me I was gutted and the only thing I could do was get back on it with a fresh rig and a few more spods and I was back out there.

It wasn’t long until I was into my next fish and what was to be the last of the session and after a bit of a fight I get it on the matt and it weighed in at 15lb, still a welcome fish. After a short while Ste’s alarms sounded and he was in and fighting with a carp but it wasn’t long before it spat the hook and he reeled in the fish less rig. The look on his face said it all, gutted! His one and only run and he was done by a hook spit. After this we decided it was time to start the pack up and we kept the rods in as we brought the van and started packing up and lugging gear to van. It was a slow uneventful pack up and soon we were back on the road looking forward to next time

Usually I spend £25 plus on bait, dependant on how/where I’m fishing, but this trip has proved that good old supermarket value frozen corn can sometimes champion over other, more expensive baits, going back to basics and adding little and often to the spot to keep them coming back, does the job! So if you ask me how to catch carp on the cheap! I say get yourself some sweetcorn!

I’ve took some time this afternoon while writing this to film making the rig that nailed the fish I landed and the one I lost and given instruction on how to tie it. The video can be found below along with a list of what you need to put it together. I have also included the brands that I use although any of the other brands are equally good.

How to catch carp on the cheap! Find out now!