Is Making boilies at home easy? It turns out it really is and you only need a few things. I’m going to be making some Mainline Cell in my kitchen and talk you through just how easy it is.

Firstly there are a few things we need and I have listed these below. 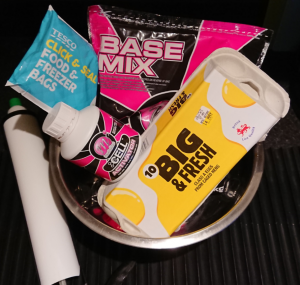 However you can use your hand instead of a sausage gun and rolling table it will just take you a little longer.

I like to make my bollies in 2 500g batches rather than the whole lot at once. First I take the bowl and crack 4 eggs in and then add the activator. The bottle of activator states that you need 15ml per 500g which is approximately 1 tablespoon. Don’t forget the shake the flavoring well before adding it. once you have added the eggs and the flavor to the bowl you can then mix the two together with the fork.

Now that we have this mix, we need to slowly add the base mix in small amounts until we get the right consistency. You want it to still be a little wet but not sticky to touch. Be careful at this stage to not add to much mix as this will make your paste to dry. It is easier to keep adding small amounts rather than try to correct this later on.

Now that we have a mix that is does not stick to you hands or bowl and does not feel dry. Go ahead and remove this from the bowl and Start to roll it out to fit the sausage gun. If you are not using a sausage gun then simple start rolling out a sausage by hand. I’m using the 16mm nozzle on the gun but this is just preference if you’re rolling by hand just keep rolling until you get the thickness you want.

Rolling the Bait with the gun and table. 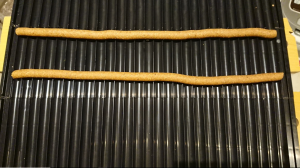 I then place the larger sausages in the in the gun. It normally take half of the mix each time. Then squeeze the trigger a few times until you get the mix to start exiting the nozzle. Then start squeezing onto the rolling table. I tend to do this from a height as it stops me from laying the sausage too thick. for my table I can make two lines of mix and roll them at the same time.

Now that we have a few sausages on the table I’m going to line up the top of the table with the bottom press down onto the mix and roll back and forth a few times. Then lift the top of the table off with the last roll you shouldn’t have any stick to the top and should be left with two lines of bollies ready for the next step. Simply repeat this process until you have no mix remaining. 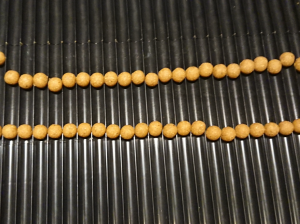 You will also find that you have a few bits of mix at the end that don’t roll into balls the first few times I tend to add these to any remaining mix either in the gun or before I load the gun again. The last time I roll I put these bits of mix aside and then add them to the left over bits in the gun and nozzle. I then hand roll these so not to waste any mix.

Rolling the Bait by Hand.

If you are rolling the bait by hand then all you need to do is roll each sausage to your desired thickness and line them up in equal lengths. Then take a knife and cut them into equal sizes. Normally as long as they are thick. Then take each one and roll them in your hand until they make a ball or simply leave them as is.

So this is the easy part, but timing is key. get the pan on the stove and bring the water to boil. Then in small batches add the bolies to the pan and boil for around 2 mins for each batch then remove. place each batch on a tray to cool and then add the next batch and repeat until all the raw boilies have been boiled.

Now all that is left to do is let the boilies cool, then bag up in a resealable bag and freeze or simply get them straight out on the lake. You can also air dry them for longer if you want to. Just leave them on a tray or in a air dry bag over night. 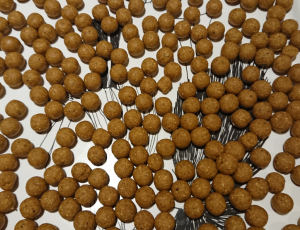 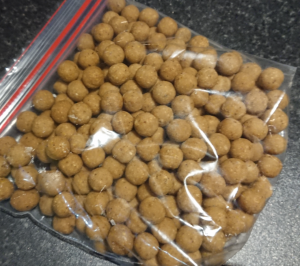