Whats New With Us...

This could have gone better than it did, I find when looking at others who write about there fishing that you don’t often hear about there mistakes and where they feel they went wrong. I wanted to take the opportunity to write about how a small mistake cost me a fish and the only fish I would have had this session.

It had been awhile since I was last out on the bank and I had been itching all week to get out there and snag a fish or 2 on my local water. Time plays a big part in my fishing and I don’t have a lot of it spare so it’s sometimes hard for me to get out so this weekend was to be that time. I’d set some time aside and told the missus i’d be away Saturday night. Having little time through the week I had to get to the tackle shop on Saturday before I hit the bank. I picked up Fresh hemp and tigers for my free offerings and planned to mix this with some bollies I already had ready to go plus I knew tigers would be a great alternative if I needed them. 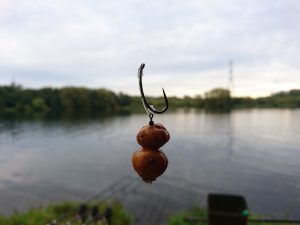 I arrived at the lake just after 3pm and unloaded the car onto my barrow and began to walk down the path to the lake. It looked like a great day for it down the bottom end of the lake, there was a thin layer of cloud and the wind was pushing to the bottom end. As I walk down I only saw two other anglers and none of them where I was heading. I decided it was best to fish off the barrow until the sun started to dip and without any sign of crashing fish I could only hope they were following the wind as I followed my gut and headed to the far end of the lake. Knowing it is weedy this end and got the marker rod out and started to quickly find a clear patch I knew of.

With the clear patch found I clipped up and reeled in and started to count the wraps and then matched all my rods. Now all at the same distance I can hit the spot every time even in darkness but where I was fishing and my accuracy would not be the issue. I sent the spomb out 4 times with my Hemp, Tiger and Bollie mix first. Then I attached 3 rigs I had premade and got them on the spot. Knowing the lake quite well and that I might be here until late in the night or even the morning before a bite I waited for signs of fish which never came. I knew I would be ok tho I had fished these conditions at this end of the lake many times and had fish at either around 3am or 9am. I thought it was just a matter of time before I got a bite and I was right. 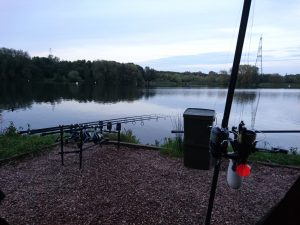 As the sky cleared and began to darken I decided this would be were I would stay, so I set up the bivvie and got settled. I knew I needed to keep busy and kept feeding the swim with small amount of bait and the hours passed and it wasn’t long before it was dark and the only sounds I could hear were from the motorway nearby. I got my head down and closed my eyes to get some sleep and it wasn’t until 5am that I would wake again. With the sun not due to rise for another hour or so I held off the urge to recast and bait up the swim. I knew if anything had swam through the baited area they would come back and I would be in. Hours passed and it wasn’t until 9am that my alarms screamed off. I quickly jumped to my feet and slipped on my boots and stumbled to my rods. As I stuck in to the fish there was something else I could feel and with this rod being the closest to the weed on the left of my clear patch and the familiar grating I knew it had dived straight in the weed. But it wasn’t last yet the fish was still moving and I could clearly feel it. After a short battle I knew it had gone deep into what was left of the weed and I could only feel a slight nodding on the line through the grating of the weed. I decided to let it free its self and set the rod on the rests and gave it some slack. Now it was just a waiting game and a few moments later I had more beeps and knew it was on the move again. I reeled in the slack and started to play the fish again and then the line went slack. I started to reel and and saw my bait coming back to me, she had spat the hook and my only opportunity was now lost. It wasn’t until I inspected my rig that I realised that I had used a rig exactly the same as what I intended except for one thing. THE HOOK. I had used a rig with a barbless hook from a previous session and as a result made it easier for the fish to spit my hook and it had done exactly that. Gutted but not defeated I quickly changed the rig and got it back out on the spot and topped up the swim with more bait but this was to be my only opportunity.

I can’t quite describe how gutted I was to have lost this fish to my own downfall but I can tell you that it will be a mistake that won’t be repeated. Though my own excitement of how perfect the session seemed I’d forgotten to check to most important park of my tackle, the hook.

I hope your weekends were more successful than my own and can only hope that you all learn from this as I have.